Mold is a prevalent problem in the house. If you fear you have mold in your place or if you’re thinking about buying a home, you’ll want to do your due diligence. Without wasting time calling for an inspection, here are five common types of mold typically seen by inspectors during their inspections:

Aspergillus sp.
Aspergillus spores can grow almost anywhere and seldom causes problems indoors. Health effects from exposure depend on the person and the amount of exposure. More sensitive people can have trouble breathing or show signs of asthma. 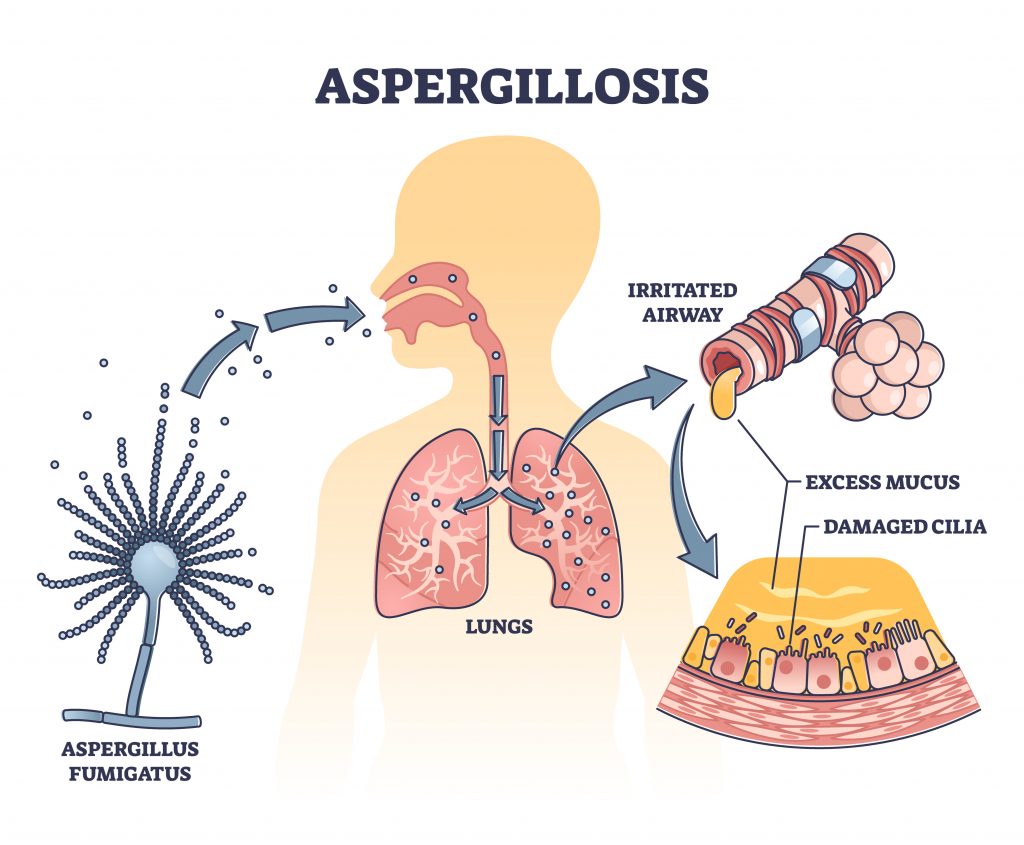 Aspergillosis lung infection caused by Aspergillus, vector outline diagram.Irritated airway, excess mucus and damaged cilia caused by common mold fungus spores.Microbiological danger for human health. Aspergillosis is an infection, usually of the lungs, caused by the fungus Aspergillus. A ball of fungus fibers, blood clots, and white blood cells may form in the lungs or sinuses. People may have no symptoms or may cough up blood or have a fever, chest pain, and difficulty breathing. https://www.msdmanuals.com/home/infections/fungal-infections/aspergillosis

Mucor sp.
Mucor spores are common in buildings and homes with a history of water intrusion problems, even if the source is unknown. This mold is more likely to occur in poorly ventilated bathrooms and seldom causes health effects unless there’s a lot of it growing indoors. It has been associated with skin rashes when high levels are found on damp clothes or carpeting.

Penicillium sp.
Penicillium spores are commonly found outdoors during warm months due to their ability to grow at temperatures up to 77 degrees Fahrenheit (25 degrees Celsius). In colder climates, it grows best indoors, where it can be isolated to any moisture problem areas such as basements and crawlspaces. It is not considered a health concern unless it’s found at high levels and there are poor ventilation or water intrusion problems present.

Stachybotrys sp.
Stachybotrys black mold, or simply black mold (also known as “toxic black mold”), is one of the most toxic molds due to its production of mycotoxins (actual toxins produced by molds). This can cause building-related illnesses in humans if exposed to it for an extended period at elevated concentrations. These symptoms include fatigue, headaches, fever, chest pain, and skin rashes.

The presence of these spores indoors is usually due to previous water damage. It is essential for people with existing respiratory problems such as asthma or allergies to avoid it. You can be exposed to black mold by breathing contaminated dust, skin contact (especially in children), and ingestion (eating).

Cladosporium sp.
Cladosporium spores can get into the house through outdoor air and cause allergic reactions in some people. It isn’t considered a health concern unless it’s found at high levels and there are poor ventilation and water intrusion problems present. If you find this type of mold in your home, don’t panic! And for heaven’s sake, don’t try to clean it up yourself with bleach because you’re just going to stir the spores up in the air and make your problems ten times worse!